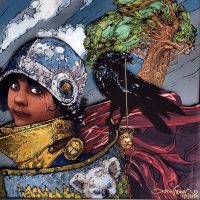 Justin Groom is an illustrator and painter, and one half of Leafmore Studios – formed in 2022 with his partner, artist Becca McCoy.

Justin had early career success with a breakout underground comic book BIOHAZARD, released in 1990 and edited by Allen Shevy who also hired Justin as an illustrator and collaborator for industry periodical WORLD OF FANDOM.  Justin was a fixture in the Tampa, Florida mid-90s nightclub scene creating murals, Trompe l’oeils, and structural / 3D installations.  After a corporate-hiatus, Justin returned to full-time art in 2019 with work that includes fine art, commissions, and logo and product designs, exhibiting in Florida and Georgia, appearing at comic-cons, and vending at artist markets.

He possesses a singular, recognizable aesthetic throughout all his work while maintaining versatility in content.  He is equally proficient in pen and ink as he is digital render, and in subject matter from the gory to the whimsical.  His inspirations include HEAVY METAL and Moebius, current events and trends, and nostalgia.  Learn more at leafmorestudios.com.